Huckleberry Finn Without the Offensive Words? It's Already Been Done 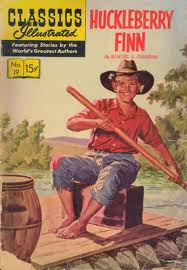 Excerpt: Saying they want to publish a version that won't be banned from some schools because of its language, two scholars are editing Mark Twain's classic Adventures of Huckleberry Finn to eliminate uses of the "N" word and replace it with "slave," Publishers Weekly writes.

The edition, from NewSouth Books, will also shorten an offensive reference to Native Americans.

As PW says, "for decades, [Huckleberry Finn] has been disappearing from grade school curricula across the country, relegated to optional reading lists, or banned outright, appearing again and again on lists of the nation's most challenged books, and all for its repeated use of a single, singularly offensive word."

What about folks who are offended by Huck Finn himself, who don't think he's an appropriate role model for children?

Best advice I ever received in college.  Professor Victor A. Doyno, during the first session of a class on Chaucer, suggests that if we want to fully understand Chaucer's world and the people who inhabited it, we need to step out of our present-day mindset.   (Not the easiest thing for a college student to do, particularly in the spring semester of 1970.)   It's advice that can be applied to any historical text.  (I imagine now Professor Emeritus Doyno has plenty to say about this latest Twain development.)
Posted by Retiring Guy at 12:28 PM

This is all about limiting Free Speech. After all, censorship is everywhere. The gov’t (and their big business cronies) censor free speech, shut down dissent and ban the book “America Deceived II”. Free speech for all.
Last link (before Google Books bans it also]:
http://www.iuniverse.com/Bookstore/BookDetail.aspx?BookId=SKU-000190526