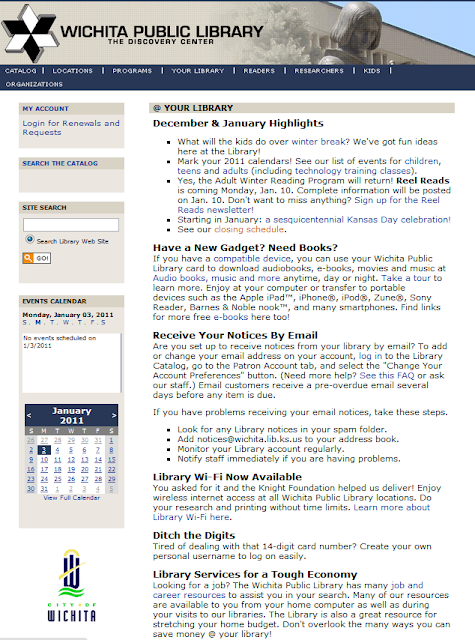 LINK
Link to December 29 Wichita Eagle article, "Libraries to close 4 days to save".

Excerpt: To reduce costs by $170,000 in 2011, Wichita's public library will put its employees on furlough and close all nine of its locations on four additional days.

One furlough and closure date is set for each quarter, starting with Jan. 7.

"We've tried to spread these out for our users," said library director Cynthia Berner Harris. "We looked at days where we knew we had low traffic."

The four furlough dates will save the city $80,000. A little more than $90,000 will be saved by shifting four full-time positions to eight part-time positions, Harris said.

As cities around the country have dealt with tighter budgets, libraries have been a prime target. Dallas' library budget of $13 million for 2011 is 46 percent less than it was in 2008.

By comparison, Wichita's library budget of $8.05 million for next year is down about 2 percent from 2010. Most of that reduction is from federal and state grants, which account for about 6 percent of the library's budget.
Posted by Retiring Guy at 7:21 AM