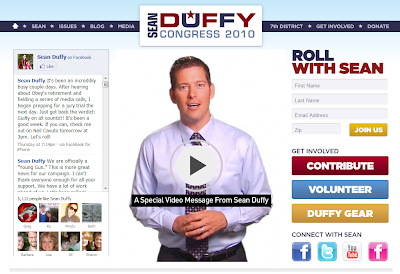 Excerpt: Blessed with a TV-star smile, an athlete's body and lawyerly gifts of gab and jab, Ashland County District Attorney Sean Duffy seems born for the role of small-town guy bucking the odds to win a seat in Congress on his first try.

But Duffy, a world-champion lumberjack and speed-climber of 90-foot cedar poles, knows that winning means surviving the nerve-racking plunge to the finish.

"Whether it's Dave Obey or someone else, this is still going to be tough," Duffy said hours after the powerful Democrat announced the end of his 41-year reign. "This is my first time to the prom. I don't know how it works."
Posted by Retiring Guy at 9:20 AM