Library Looks for Room to Expand

Excerpt: The Poynette Area Library is growing in popularity and programming, but village officials are unlikely to accept an offer to expand next door.

Laura Walters, owner of Little Blessings Gift Shop on 124 N. Main St., recently offered to sell the building to the village for $190,000 for the purpose of expanding the library.

Poynette Administrator Daniel Guild said while he and trustees are not opposed to planning for the future in terms of library expansion, they are “squarely focused” on completing the construction of the fire station first. He praised the work done by Poynette Area Library Director Kris Daugherty and her staff in expanding the library’s reach and programming and said he’s committed to working out a long-range capital improvement plan for the village, which includes the library.

Daugherty, who took over last year, said lack of space has become an issue for the library, which increased its circulation last year more than any other in the South Central Library System. 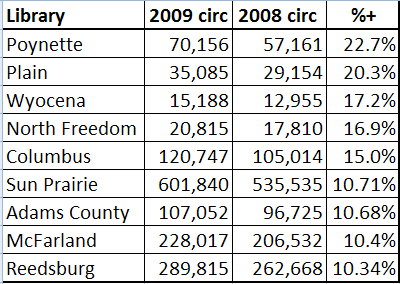 As far as library locations, though, the new Sequoya branch of the Madison Public Library wins the crown.

Some of Sequoya's growth appears to be the result of shifting use patterns among the branches on Madison's west side. 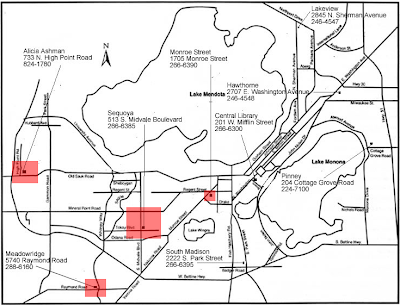 First off, in the interests of disclosure, I worked as a Clerk-Typist at Sequoya until quite recently.

Sequoya was closed for a month in late 2008 as it went from the old library to the new, and the library was open on some Sundays in 2009, whereas in 2008 the library was only open on Sundays for one or two special events. So, the numbers aren't particularly comparable.

I think Sequoya was up by somewhere in the high single digits for 2009 over 2008 over the first three-quarters of the year. My memory might be inaccurate, though.