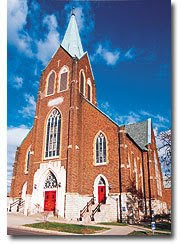 Excerpt: Most people know that Andrew Carnegie donated a heap of money to build libraries. His generosity helped build more than 2,500 around the turn of the last century throughout the English-speaking world.

But it turns out the guy was a big-time organ donor, too. (Pipe organs, not kidneys.) The Scottish-American steel magnate helped pay for more than 4,000 pipe organs in churches and concert halls throughout the country, including the one at Capitol Hill Lutheran Church in Des Moines. The instrument was installed in December 1909, and the congregation celebrates its 100th anniversary with a recital at 3 p.m. today.
Posted by Retiring Guy at 10:25 AM

I found your site on stumbleupon and read a few of your other posts. Keep up the good work. I just added your RSS feed to my Google News Reader. Looking forward to reading more from you down the road!

Thanks for that awesome posting. It saved MUCH time.