A Look at the Former De Pere Public Library Building 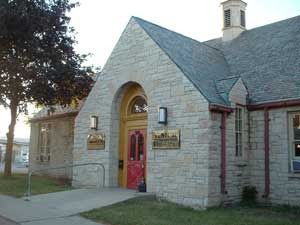 Excerpt: A major economic stimulus package for the United States during the 1930s produced lasting buildings such as the one at the corner of Main Avenue and Fourth Street.

The De Pere Public Library was built to look something like a large stone cottage in a variation of the Tudor revival style. Often the style is seen with ornamental half-timber work, but the old library is more austere.

The building is now home to ComedyCity and Venture Theater. (Though not for long, in the case of Comedy City.)
Posted by Retiring Guy at 7:13 AM