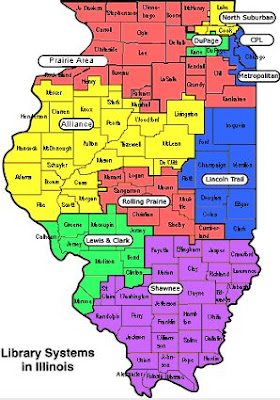 Link to January 22 The Southern article, "Libraries demand due funds".

Excerpt: A successful e-mail campaign apparently jogged some overdue funding loose for the state’s regional library systems, but some worry the money is too little, too late.

The Save Illinois Libraries campaign to restore the systems’ funding resulted in thousands of e-mails for Gov. Pat Quinn and state Comptroller Dan Hynes on Wednesday, asking them to make sure the regional library systems received what was appropriated to them in the state budget, said Shawnee Library System Executive Director Joe Harris.

More than 18,600 e-mails were sent by supporters, Harris said, and the systems were notified they would receive a portion of their funding.

For Shawnee, that means about $400,000, about a third of its $1.1 million annual state funding, could be received as early as today.

“The rest of the payments we expect will come slowly or not at all,” Harris said Thursday during a meeting of Shawnee’s board at Benton Public Library.
Posted by Retiring Guy at 8:49 AM