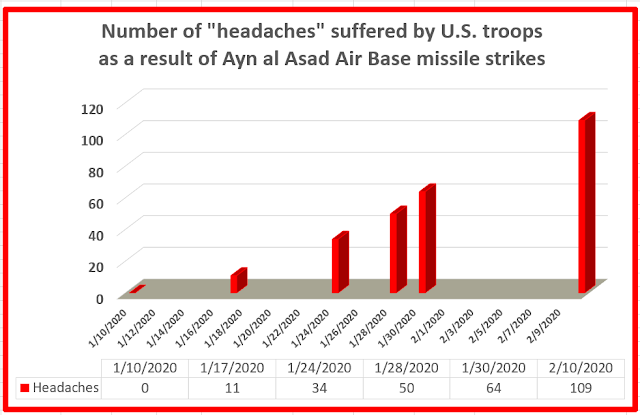 
At least a dozen missiles were fired during the attack, which was a retaliation for the killing of a top Iranian general, Qassim Suleimani, by an American drone strike in Baghdad on Jan. 3. The Trump administration at first said there were no injuries, but a week later said several service members were evaluated for possible concussions.

Then, days after Mr. Trump’s statements in Davos, the Defense Department said that 34 people had suffered brain injuries. The number was later increased to 50 and then to 64, with military officials saying that the symptoms of traumatic brain injuries could take weeks to appear.

The repeated revisions have drawn outrage from some veterans and senators.

On Wednesday, Mr. Trump dismissed concussion symptoms felt by the troops as “not very serious,” even as the Pentagon acknowledged that a number of American service members were being studied for possible traumatic brain injury caused by the attack.

“I heard they had headaches,” Mr. Trump said at a news conference in Davos, Switzerland. “I don’t consider them very serious injuries relative to other injuries I have seen.”


Waiting for the inevitable.  This makes so much sense now: the phrase "wait for the other shoe to drop" was born from noisy New York City neighbors:

"A common experience of tenement living and other similar style housing in New York City during the manufacturing boom of the late 19th and early 20th century. Apartments were built similar in design with one's bedroom under another's. Thus, it was normal to hear a neighbor removing shoes and hearing them hit the floor above. As one shoe made a sound hitting the floor, the expectation for the other shoe to make a similar sound was created."