Dear Alberta Darling, Nobody at the Wall Street Journal uncovered anything; it's just a case of an editorial writer making wild, unsubstantiated allegations 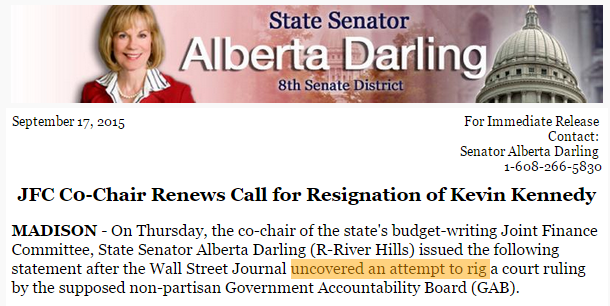 Little evidence suggests GAB out to get GOP.  (Wisconsin State Journal, 7/12/2015)
Alberta is late to the party.

Moreover, GOP leaders are ignoring key facts about the GAB as they try to weaken if not disband the independent and nonpartisan watchdog agency that oversees campaign finance, elections, ethics and lobbying laws.

Related post:
Government Accountability Board audit: Republicans trot out press statements they've had in the can for onths.  (12/13/2014)