Now in heavy rotation on your favorite oldies station. 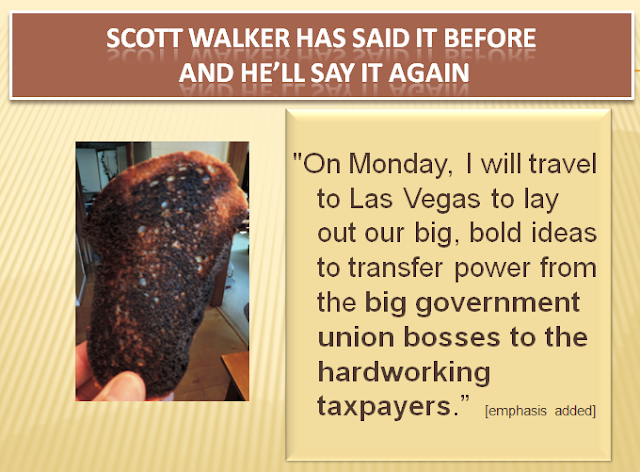 As quoted in Scott Walker pledges to take on federal unions on Day 1 as president.  (Milwaukee Journal Sentinel, 9/10/2015)

Say it with me!

“We want to shift government power from the big-government union bosses to the worker. Nationally, for us to be able to make these sorts of changes … we have to make some similar changes.”
As quoted in Scott Walker promises to turn back the clock on taxes to Reagan era.  (Washington Times, 7/13/2015)

The big government union bosses are worried that workers may actually choose to keep the money for themselves.”
As quoted in Union Bosses Hate Gov. Walker for his Success.  (National Right to Work Committee, 4/3/2012)

So when we did it, the national big government union bosses came out and spent literally millions of dollars attacking us.”
As quoted in Wisconsin Governor Scott Wisconsin Addresses Recall Effort on Fox News.  (Mediaite, 12/27/2011)