Naming Rights in the News 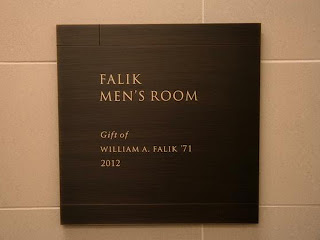 Sorry, couldn't resist sharing.
Not meant to be an editorial comment!

Excerpt:   After Baltimore officials made the wrenching decision to close three fire companies later this summer, the City Council initially sought to avert the cuts with a new money-raising strategy: it passed a resolution this month urging the administration to explore selling ads on the city’s fire trucks.

It is far from clear whether corporate logos will be painted on Baltimore’s fire engines any time soon. Officials in Mayor Stephanie Rawlings-Blake’s administration have expressed doubts about whether the proposal would generate enough money to keep even one fire company open.

But in exploring the option, Baltimore is joining dozens of other financially struggling cities, transit systems and school districts around the country that are trying to weather the economic downturn by selling advertisements, naming rights and sponsorships to raise money.


As you might suspect, this article made me curious.

Excerpt: The idea came from a "budget road map" developed by department heads in 2011, said council member Andrea Richmond, who introduced a resolution for consideration next week.

A shelter in west Copeland Park, for example, needs considerable work. This arrangement could accomplish that without taxpayer funding, she suggested.

"Maybe there's someone out there who would be happy to put their name on it and make it a better facility," Richmond said.

That doesn't mean the city will start soliciting sponsors if the full council approves the measure Thursday - or that every city facility would have a "for sale" sign on its name, Richmond said.

Any final decision will wait for the legal department's findings on just what would be involved.

Any further progress on this resolution, La Crosse? 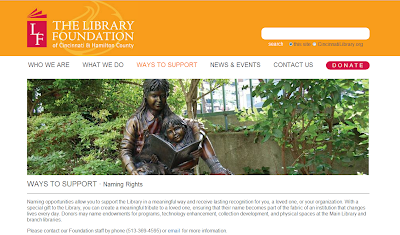 The Wautoma Public Library "Make a Donation" webpage notes that  Other special recognition opportunities such as naming rights also exist.

The Madison Public Library's "Naming of Library Buildings" policy has been in place since March 3, 2004. 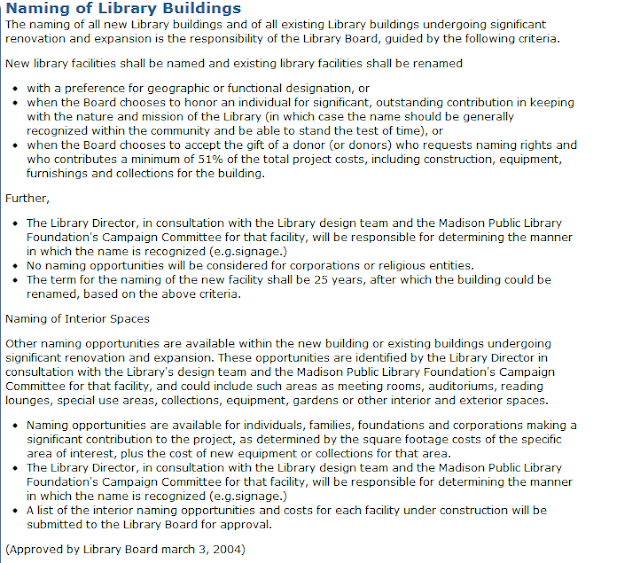 Clever variation on the theme of naming rights.  The Monona Public Library sponsored a Booked for a Day Endowment Program in 2009 and 2010. 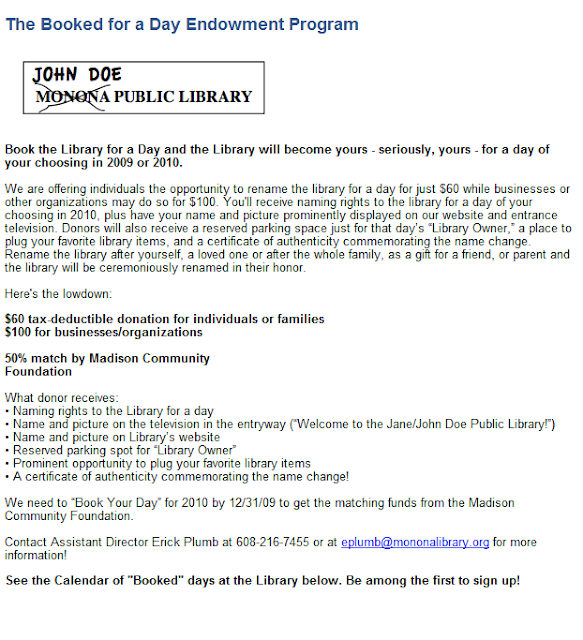 I was once in a small rural library that had the worst case of "plaque" I had ever seen. Every single piece of furniture and shelving had a plaque with someone's name on that had donated money for it. Even the circ desk. I thought it was disgusting.