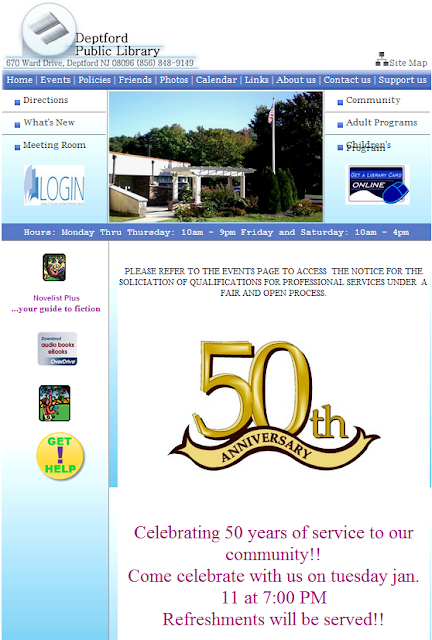 Excerpt: On Jan. 11, 1961, the first Deptford Library opened in a small room next to the Deptford High School Library, holding only 2500 books.

On Tuesday, the library will mark its 50th anniversary in a spacious building on Ward Drive with a circulation of more than 200,000 items annually.

"I've been the director here for 14 years and we just reached the 200,000 mark on Dec. 31," said Deptford Public Library Director Arn E. Winter. "Every year I've been here, circulation has grown in steady progression, about five to seven percent every year. People have the idea that libraries will just fade away with all the electronic means to get information, but our usage is still growing."

The library has celebrated many significant milestones since it was founded 50 years ago.

In 1963, the library moved into the old Almonesson Methodist Church building with the assistance of 80 volunteers. In 1965, the library association hired the first director Geraldine Johnson. In 1968, Johnson took a position with Deptford Public schools and Lois Green was named director. In 1981, the library was moved to the former senior center on Ward Drive. In 1997, Winter was named the library's third director and in 1998, the library doubled in size to more than 11,000-square-feet with a major township-sponsored enlargement and remodeling.
Posted by Retiring Guy at 9:13 AM