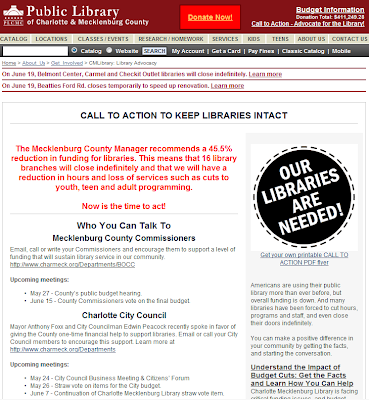 Excerpt:   The city offer is contingent on several things: a $1.4 million credit from the county on the joint city-county ledger (don't ask); and four of the six Mecklenburg towns must also offer support.

Last week Mecklenburg County commissioners agreed to reduce the libraries' proposed cut by $3.5 million. They also put strings on the money, such as requiring library trustees to consider consolidating some operations with county government. And the county's list suggests "consideration" for "reinventing the public library."

All this takes place amid questions, mostly off the record, among elected officials about whether the library is well run. The library system is separately chartered under state law and run by appointed trustees, though it gets more than 90 percent of its money from the county. "This might be good for them," District 6 council member Andy Dulin said Monday, before voting against the library money.

Some county commissioners are talking takeover. Late Monday, commissioner Karen Bentley e-mailed the county attorney asking, "Does the BOCC [board of county commissioners] have the authority to disband the current Library Board? ... What would have to occur in order for the BOCC to bring the library system under temporary County leadership?"

Charlotte Mecklenburg libraries haven't seen such large-scale reductions since the Great Depression. (3/17/2010)
Posted by Retiring Guy at 7:04 AM