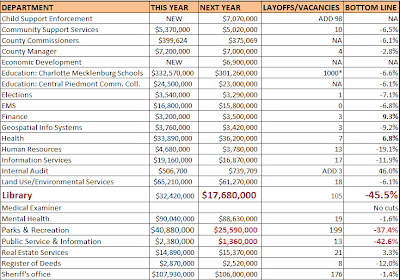 Link to May 24 Charlotte Observer article, "Speak out on county budget".

Observer "In My Opinion" columnist Dannye Romine Powell says it's "Time to step up and help local libraries".

Excerpt:  Libraries Director Charles Brown told me Monday that if the worst happens, "it will take years, if not decades, to rebuild on what is widely considered to be one of the most successful urban libraries in the nation."

Stop the worst from happening.

Tell them what it means to you to use your neighborhood library's computer for job and college applications, to borrow books you can't afford to buy, to sit in its air-conditioned comfort to feast on magazines.

Tell them how, thanks to the library, your children now read with flashlights under the covers, how one book has led them to another, until the habit of intellectual adventure has taken firm root. Tell them that libraries teach kids to strong-arm boredom.

Tell them that some things on the budget, and in life, are negotiable.

But that the pursuit of knowledge - free, accessible and open to the public - never is.

Charlotte Mecklenburg libraries haven't seen such large-scale reductions since the Great Depression. (3/17/2010)
Posted by Retiring Guy at 9:22 AM