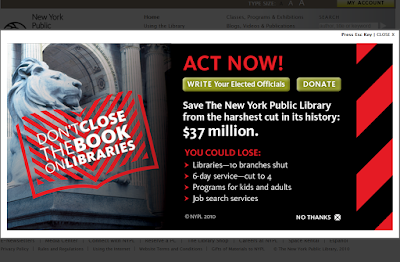 Excerpt:   The New York Public Library (NYPL) is facing a $37m reduction in financing. The resulting reduction in services and job losses will inevitably reflect the huge scale of cuts which are outlined in the Mayor’s Executive Budget Proposal.

It is hard to argue against fiscal responsibility in these straitened times, but it is not hard to argue for fairness. The cuts heaped on the NYPL are more than four times greater than the next public sector service area affected. A disproportionate difference by any measure.

This decision may reflect a Philistinism in the Mayor’s office or maybe the bureaucrats saw an easy target to pick off. Who knows? The decision has been made. The question is what can people do to save their library system from being stripped to the bone?

“Luckily for us, social media is the great equalizer,” says Deanna Lee, Vice President for Communications and Marketing. “Don’t Close the Book on Libraries” is the title of the advocacy campaign “aimed towards getting restorations from the City Council and Mayor from the current proposed City budget cut”. Visitors first arriving at the main NYPL site will see a 'homepage hijack'.