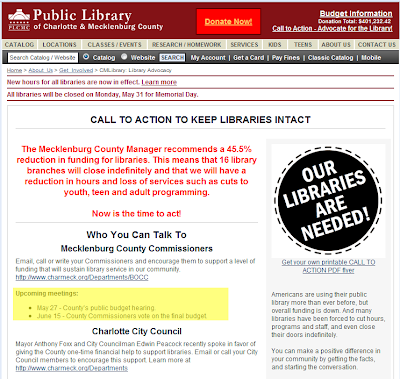 Excerpt: Charlotte Mayor Anthony Foxx has proposed that the city give schools and libraries a one-time financial bailout, but city staff isn't working on a rescue plan and some council members said they don't see any momentum behind the idea.

"There hasn't been any formal or behind-the scenes discussions about it," said City Council member Patrick Cannon. "We have to get our own ducks in a row."

On April 26, Libraries Director Charles Brown met Charlotte City Manager Curt Walton and managers of other Mecklenburg municipalities and asked them for $3 million total to stave off some library closings. If the libraries received that cash, along with $5 million from Mecklenburg County, Brown said he could keep from closing 12 library branches in early July.

Brown said two members of the library board also met with Foxx and asked the mayor for the same financial help. Brown said he hoped the towns could donate $1 million and the city of Charlotte give $2 million.

Charlotte Mecklenburg libraries haven't seen such large-scale reductions since the Great Depression. (3/17/2010)
Posted by Retiring Guy at 10:34 AM