Libraries Did Not Kill the Video Star 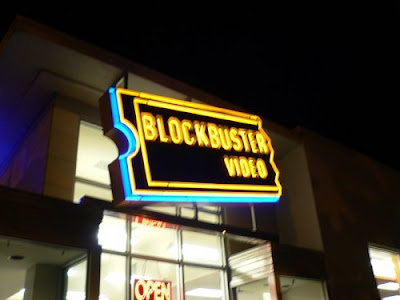 Excerpt: Shares of Blockbuster fell 12 cents, or 29%, to 28 cents a share. The company's market capitalization now totals about $34 million, or just a fraction of its fourth-quarter revenue of $1 billion. The company reported an operating loss of $394 million in the period.

Because of its losses and "the increasingly competitive industry conditions," the company sees "substantial doubt about our ability to continue as a going concern," according to the company's filing.

Since 2007, Blockbuster has racked up losses totaling more than $1 billion amid fiercer competition from other video-rental services, such as Internet-rental service NetFlix and kiosk-operator Redbox, which sets up it boxes at grocery stores.  [They seem to like Walgreen's in Retiring Guy's neck of the woods.)

In 2009, Blockbuster closed 718 company-operated and franchised stores worldwide, including 572 in the U.S. It also sold its 184-store chain in Ireland. The company this month reinstated late fees on store-based rentals.  (The store where Retiring Guy took the pictures for yesterday's post is apparently managed by Maytag repairmen.)

Excerpt:   Blockbuster has been saddled with massive debt since media conglomerate Viacom (VIA) spun the company off in 2004. As part of the deal, Blockbuster had to pay Viacom shareholders a $5 per-share dividend, and the movie rental company accumulated about $1 billion of debt in the process.

At the time, the company was making profits of about $500 million a year, so Blockbuster assumed that it would be able to pay down that debt quickly. But questionable business decisions -- like canceling all late fees -- ate into the company's profits.

Excerpt:   Blockbuster which was once a giant in the video and game rental industry has been fighting an uphill battle in recent years. The company which has headquarters in the Renaissance Tower located in Downtown Dallas, Texas opened its first store back in 1985. Over the years, Blockbuster grew to be a major contender in the industry however that is not the case in recent years. In the past decade Blockbuster has reported billions of dollars in loss. Between 2002 and 2006 the company lost almost four billion dollars and continues to struggle to regain consumer interest and loyalty.