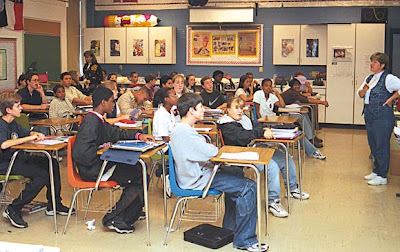 Excerpt:     School districts around the country, forced to resort to drastic money-saving measures, are warning hundreds of thousands of teachers that their jobs may be eliminated in June.

The districts have no choice, they say, because their usual sources of revenue — state money and local property taxes — have been hit hard by the recession. In addition, federal stimulus money earmarked for education has been mostly used up this year.

As a result, the 2010-11 school term is shaping up as one of the most austere in the last half century. In addition to teacher layoffs, districts are planning to close schools, cut programs, enlarge classes and shorten the school day, week or year to save money.
Posted by Retiring Guy at 7:32 AM