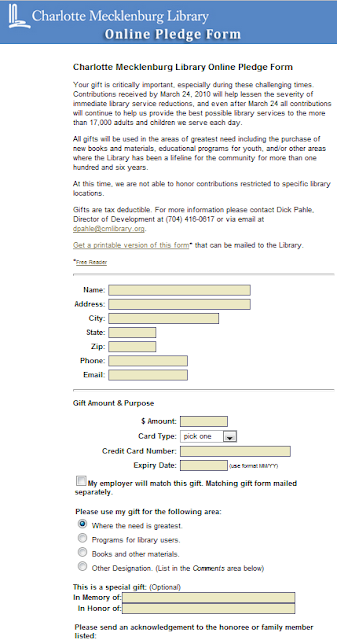 Excerpt:   The Charlotte Mecklenburg Library system is considering different ways to cut $2 million from its budget by July after days of public outcry over the planned closing of half its branches.

But county leaders continued to warn Monday that a bigger problem looms with the certainty of massive cuts in the next budget year.

County departments and agencies are trying to cut $95 million in spending for the year that starts in July.

Library Director Charles Brown said Monday that senior staff are reconsidering all their options on how to deal with immediate losses in county money, including additional salary and benefit cuts.

Steps already taken include four unpaid furlough days for the staff and a discontinuation of employer matches to the employee 401(k) program.

Observer columnist Dannye Romine Powell rereads a page from an earlier sad day in the history of the Charlotte Public Library.

Charlotte Mecklenburg libraries haven't seen such large-scale reductions since the Great Depression. (3/17/2010)
Posted by Retiring Guy at 11:22 AM