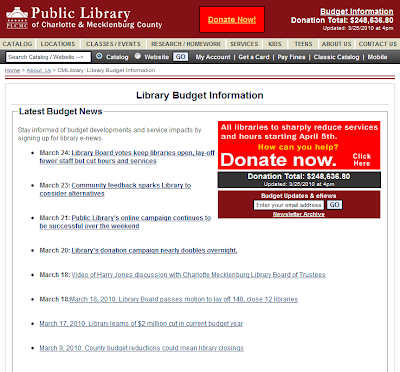 Excerpt:    Board member Darrel Williams said it's inevitable that the libraries will have to choose between quantity of branches and quality of service.

"Do we strip the guts out of the system to keep more libraries open?" he asked board members at their Wednesday meeting. "I think we're fooling ourselves if we think there are not going to be any layoffs in the next fiscal year. ... I want to emphasize that this is a Band-Aid."

The board's vote Wednesday came in front of an overflow crowd of about 100 - three times the number on hand for last week's decision to close 12 libraries. Included were patrons, preachers, children with signs in support of their neighborhood branch, and even elected officials such as Mint Hill Mayor Ted Biggers.