A New Day is Dawning in Charlotte/Mecklenburg County 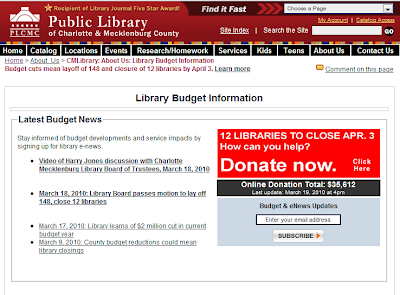 Link to March 20 Charlotte Observer article, "Library faces new day, as do we all".

Excerpt: Talk about hitting a nerve. Lovers of libraries - along with devotees of common sense - left their hushed whispers in the stacks late last week to roar over the threatened decimation of the Charlotte Mecklenburg Public Library system.

Bonnie Blum of Huntersville was among dozens who wrote to The Observer. "I am dumbfounded at the depth of cuts being asked of our public library," she said. "Cutting facilities in half? Sure, I anticipated seeing several branches close ... and/or reduced hours in order to save money, but this borders on the profane."

Laura Rice of Charlotte wrote that closing libraries and cutting school funding will backfire. "Ask any citizen who is currently trimming household expenses to deal with the current economic crisis, and he/she will tell you that you start by eliminating 'extras' - NOT the basic necessities. And in our society, any institution that educates, informs and cares for its citizens should never be considered an 'extra'."

The library board voted unanimously Thursday to close half its 24 branches and lay off a third of its workers after the county ordered the system to cut $2 million in spending by June 30.