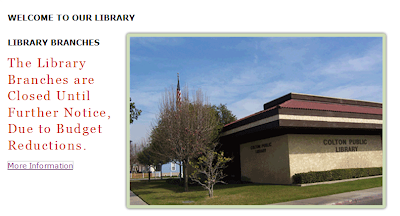 Excerpt: As tax revenues plummet and desperate local governments struggle to close widening deficits, some are looking for cuts in quieter places long considered off limits, like public libraries.

Last week the city of Colton shut down its three libraries and laid off nearly 60 employees to help plug a $5-million hole in its budget. Moves are afoot to shutter a library in Ventura, and other communities are slashing library hours.

"I've never seen such devastation in libraries," said Jackie Griffin, head of Ventura County's system. She recently returned from a meeting of Southern California library officials where more than half reported having to institute furloughs, layoffs and other austerity measures.

The bad times for libraries are coming just as more people are discovering how useful they can be.

"The demand for Internet access alone is phenomenal," said Barbara Roberts, head of the Palm Springs libraries, which are now closed on Mondays. "There are lines out the door every morning."