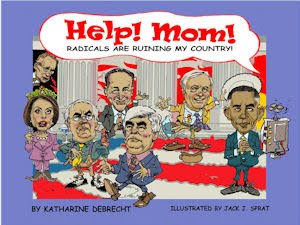 Excerpt: A new soon-to-be-released book by conservative author Katharine DeBrecht combats what she perceives as a left-wing agenda being forced on children by American media and culture.

The novel, titled Help! Mom! Radical Are Ruining My Country! paints House Speaker Nancy Pelosi – dubbed “Speaker Queenosie” – as a elitist, tiara-wearing radical who is out of touch with regular Americans. An excerpt reads:

Tell me about it, Darrrling, Speaker Queenosie primed her professionally styled hair. Little common people are entitled to a swingset just like the rest of you commoners, she jiggled a pair of jet keys through her perfectly manicured fingers.

And what is the target age group? There's way too much text, and unfamiliar vocabulary, for it to be a picture book. And it doesn't seem to fit the chapter book format. I think DeBrecht would have been best served with a graphic novel format.

See for yourself. The author's webpage provide sample pages. The text and illustrations strike me as a ham-handed effort to strike a jaunty, irreverent Mad-like tone.
Posted by Retiring Guy at 4:28 PM