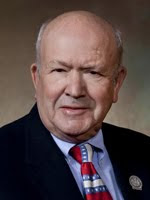 Link to October 20 Fond du Lac Reporter article, "Rep. Townsend will step down when term is up".

Excerpt: After spending 12 years representing the Fond du La area in the 52nd Assembly District, Republican John Townsend plans to “smell the roses and pamper the grandchildren.”
Townsend announced Monday afternoon he will not run for a seventh term in the November 2010 election.

“I have decided to announce my intentions now so that the people of the 52nd Assembly District will have an ample opportunity to determine who can best serve them beginning in January 2011,” Townsend said.
For the Wisconsin Library Association, this means finding another sponsor for public library district legislation.
Posted by Retiring Guy at 6:33 AM