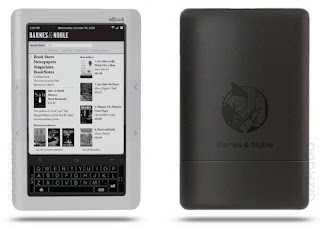 Excerpt: Like the Kindle, the Nook has a built-in 3G wireless connection (AT&T is the carrier). However, the Nook also packs in Wi-Fi connectivity and a memory expansion slot--you get 2GB of internal memory, but can add up to a 16GB micro SD card.

The Nook does weigh an ounce more than the Kindle (11.2 ounces vs. 10.2 ounces) and can't match the Kindle's battery life (10 days vs. 14 days). And while it does play back MP3 audio and has a built-in speaker, it doesn't have the Kindle's text-to-speech feature. \

That said, Barnes & Noble is touting one very important new feature: the ability to lend out e-books you've purchased to friends for free for 14 days. The company says that you'll be able to send e-books to a friend's Nook, iPhone, or iPod Touch, select BlackBerry and Motorola smartphones, as well as Windows or Mac PCs that have the Barnes & Noble eReader software installed on them.