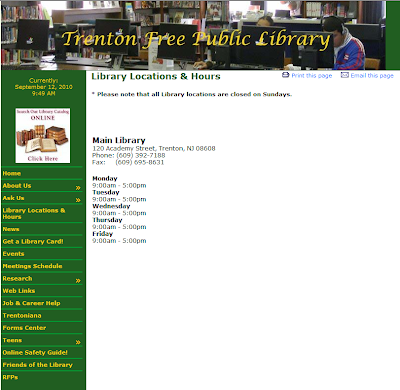 Lotta white space for the time being.
Link to September 11 Times of Trenton article, "City delays reopening of libraries".

Excerpt: Mayor Tony Mack's vow to reopen the city's four library branches on Monday will go unfulfilled, but the administration pledged yesterday to provide whatever funds are necessary to see the branches return to use quickly.

The delay stems from concerns about the high cost of opening the branches for four hours a day as calculated by library executive director Kimberly Matthews.

Trenton already faces a deficit of more than $60 million and will lay off up to 328 employees next month.

Mack and Matthews may also have different visions of the role of libraries. Mack described them as after-school havens for children, along with churches and recreation centers, rather than emphasizing their role as educational institutions staffed with certified librarians.