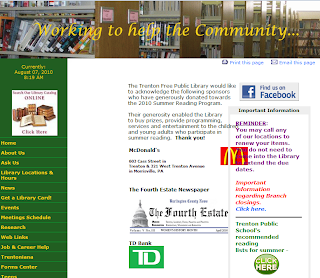 Excerpt: But even a third of a million dollars will not cover the libraries' fixed costs very long. As Library Executive Director Kimberly Matthews explained, that sum may constitute a reprieve of just a few months.

It's a dire situation, but there are a few brightening spots.

First and foremost, Mayor Mack is obviously interested in making library services available throughout the city.

Second, there is the possibility of a major donor or two committing funds to restore those services at least on a limited basis.

And there are the efforts of the revitalized Friends of the Trenton Public Library, which has organized a fund-raising campaign to support the shuttered branches.

Finally, people are beginning to understand how vital public libraries are despite the proliferation of the internet. The vast blast of information crowding the web is often uncurated and unfounded; it's no match for the guidance of a librarian toward undisputed references and reliable sources.