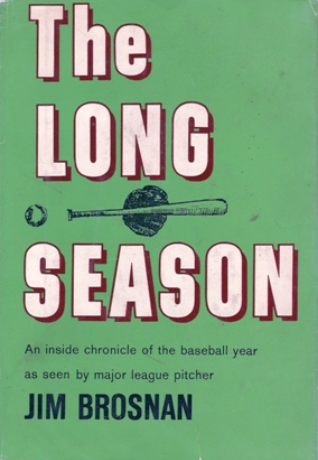 Paving the way for Angell, Kahn, and Bouton.  In 1959, Brosnan, who played nine years in the major leagues, kept a diary of his experience as a pitcher, first with the St. Louis Cardinals and later, after a trade, with the Cincinnati Reds. Published the next year as “The Long Season,” it was a new kind of sportswriting — candid, shrewd and highly literate, more interested in presenting the day-to-day lives and the actual personalities of the men who played the game than in maintaining the fiction of ballplayers as all-American heroes and role models.

I was 10 years old when The Long Season was published.  At that point in my life, I was reading what Washington Post book critic Jonathan Yardley refers to as hagiographic biographies of stars written for adolescents -- and wouldn't have been able to define "hagiographic" to save my young life.

Fortunately, the Madison Public Library still owns a copy, the only one available in LINKcat, so I can read for myself what all the fuss was about.  Brosnan was called a "kooky beatnik" by Joe Garagiola, a journeyman back-up catcher who went on to become, in my estimation, the 2nd most annoying baseball announcer in history.  (Tim McCarver will also be my #1)

Must say something about catchers and the broadcast booth.