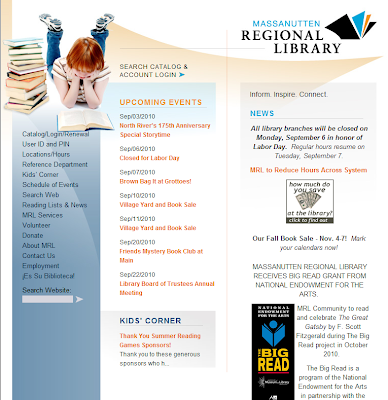 LINK
Link to September 1 hburgnews.com post, "Do public libraries still have value?"
Excerpt:    Last week, Massanutten Regional Library announced that it would close two of its branches in the small communities of Bergton and Stanley, while reducing hours of operation at four of its other locations. In announcing its decision of triage the library’s Board of Trustees sited a quarter million dollars in funding that has been lost over the past three years in spite of the fact that nearly 6,000 new patrons have signed up for library cards during the same period.


Budget cuts erode an institution like weather strips paint from a house. First a few cracks. Then things start to look shabby. “We’d like to fix it this year but we just don’t have the money. Maybe next.” Then the wood is stripped bare. The foundation starts to crumble and before you know it the shell that’s left isn’t worth fixing.
Posted by Retiring Guy at 9:27 PM