A Brief History of the Minatare (Nebraska) Public Library 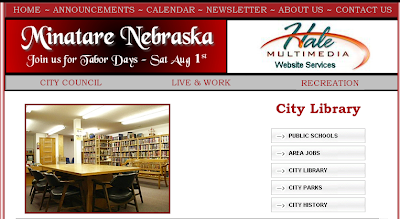 Excerpt: The earliest records available indicate that the Minatare Public Library originated back to 1902. The Presbyterian Ladies, an organization of as many as 17 women, believed in doing things that would benefit the small city of Minatare. The library became one of their projects.

The library’s first home was in a building on Avenue B.

“The building they were in, they rented the top for money and they used the bottom for meetings,” said Janice Wolf, a former librarian and current member of the Minatare Library Board.

The owner of the building, known only as Mr. Wilcox, was an employee of the Minatare sugar factory. When the factory closed, the building was sold and the library had to move. The next location was at the back of a grocery store.

The other issue concerned accumulating books for the public’s use. Contributions were solicited by the library board, of which there were two members at that time. One of the members read each book before it was placed on the shelves to loan.

The library then moved to Main Street to the former Wigwam Café until 1991. The library was required to move again due to funding cuts in the city’s budget. The library’s final move was to its present location at 308 Main Street alongside other municipal offices.
Posted by Retiring Guy at 8:29 PM