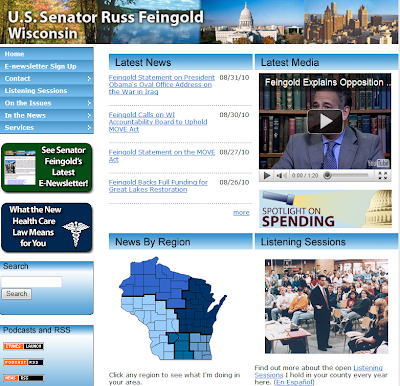 Excerpt: “Frankly, I love being the underdog,” Mr. Feingold said. “Let me have it.”

As the senator talks to voters across Wisconsin, that description is perhaps an exaggeration for an incumbent with a national reputation, but it has become a central part of his pitch. He is not eager to concede that control of the Senate could hinge on his seat — though it very well could — but he hopes the warning cry will prompt his loyal Democratic followers to rally to his side in a challenging election year.

“Clearly if somehow I lost, it would be a sign that we’re getting close to the line,” Mr. Feingold said in an interview on a recent day of campaigning. “We won’t lose, but it is something that is legitimate for me to mention — this seat could determine things.”

He handles the second one particularly well.

Q.You’re running for a fourth term in the Senate. Does that make you a career politician as your opponent says?

A.“Instead of taking a very high paying type of law job or something that I might be able to do, I have been a legislator. That’s what I do. I think it’s an honorable profession – if you’re honest and have integrity and work hard. If the question is, ‘Have I chosen a career as a legislator?’ the answer is yes. If somebody wants to put a label on it and call it a politician, that’s like saying, ‘Is a doctor a quack or something?’ You can use a negative term for it if you want, but to me, public service is an honorable thing if you do it honorably. I don’t rehire myself. The people hire me.”
Posted by Retiring Guy at 7:54 AM