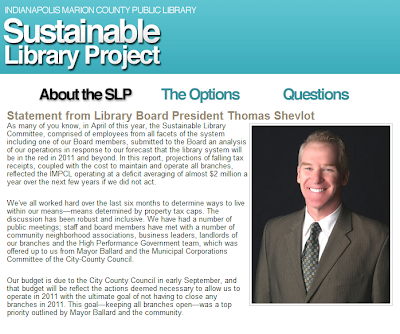 Excerpt: Preparing for the 2011 budget, she [Laura Bramble, CEO of Indianapolis library system] said, made it difficult for the library to commit time to in-depth surveying and overarching strategic planning.

Feedback also has been gathered at branches, community forums and library board meetings, Bramble said.

She said the library hopes to conduct more comprehensive community surveying in the fall.

As libraries address these challenges, though, Bramble and others in the field stressed that the library is not moving away from its core.

The library will circulate books, they said, as long as books are being printed.

And adoption of new digital formats that change how people access the library is a continuation of -- not a departure from -- the library's mission.

Gorman, who was president of the American Library Association in 2005-06, said he often hears that "libraries are no longer the dusty bookshelves they used to be."

Libraries never were those places, he said. New technologies -- be it the 35 mm film, audio recording or Internet -- always have been accessible to the public at libraries.