The Camden Free Public Library: "An oasis in the desert" 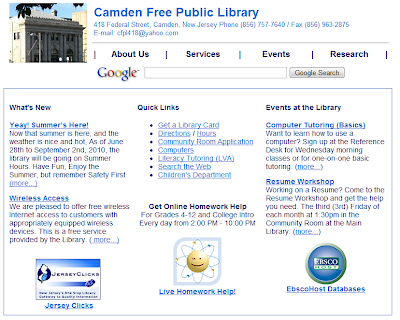 LINK
Link to August 15 column by Karen Heller in the Philadelphia Inquirer, "Camden should find funds for libraries before prisons".

Excerpt: The central branch of the Camden Free Public Library has a broken bathroom and water fountain. The second-floor ceiling is partially collapsed and the rug, severely stained. The lighting, especially on cloudy days, is abysmal.

The last new books arrived in March when the library ran out of funds and ceased paying utility bills. The 187,000-volume system has never been automated. Books are hand-stamped and checked out as they were 30 years ago. The sole van, to shuttle books and equipment to two smaller branches, has been busted for three years.

And yet, on a summer afternoon, this dilapidated institution is busy, vital, full.

Sixteen men engage in robust, near-athletic games of chess. The children's book department, decorated in Honeypot yellow and Tigger orange, hosts regular programs. In a city where many residents are without computers, the Federal Street branch's 19 terminals are in constant use, more than 2,200 visitors monthly looking for jobs and checking e-mail - and that's with the library closed on weekends. Librarians routinely assist residents with research projects, school papers, GED test prep, employment hunts.

The Federal Street library is one of the few free, safe, cool, conveniently situated sources of support, entertainment, and advancement in Camden.

The central branch is what libraries used to be in most towns, and what giant bookstores like Borders have become in the suburbs.

And in Camden, a small city with brutal big-city problems, there's nothing close to a Borders.

There's very little of anything.

"This," says librarian Wen Gu, "is an oasis in the desert.