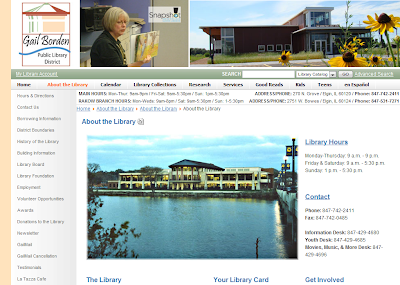 Excerpt: Carpentersville Police Cmdr. Tim Bosshart said Hopp was charged with misdemeanor disorderly conduct and trespassing after an incident at the bank in which he threatened the bank manager, saying it was "open hunting season" on the manager, after a dispute over money Hopp believed he was owed because he opened a new checking account there.

Bosshart also noted Hopp had been banned from that bank.

Hopp was elected as a library trustee last spring, but shortly afterward was banned from the main library downtown and the Rakow branch - except for board meetings - for abusive behavior toward library staff members.

The dismissal of charges does not affect his ban from the library, which runs through June 30, 2011. A message left a Hopp's home was not immediately returned.

Obviously, some further research is in order.

Excerpt: A recently elected Gail Borden Library trustee has been banned for a year from visiting the place that his constituents frequent: the library itself.

Randy Hopp, a retired engineer who was extremely critical of the library's leadership on the way to winning a 4-year seat on April 2009, was banned from library grounds and forbidden from checking out materials after the seven-member board met behind closed doors Tuesday night.

Hopp was recently arrested for assaulting his parents. He was also recently banned from the Judson College Library.