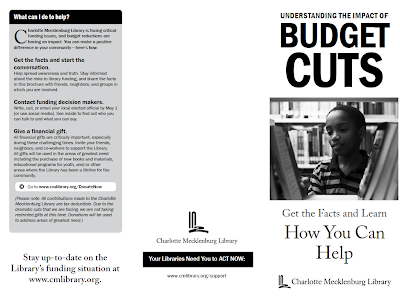 Understanding the Impact of Budget Cuts
Link to pdf file
Link to May 20 Charlotte Observer article, "County cuts, layoffs will be far-reaching.  Mecklenburg libraries, parks, schools among most affected".

The planned library cuts have received some of the most public attention. Today, trustees will meet to discuss the $14.7 million proposed reduction in their budget and vote on closing Carmel branch, Belmont Center and the Checkit Outlet on South Tryon Street uptown.

The proposed cuts equal about 45 percent of the system's current budget. Steeper cuts were avoided by working out a plan to consolidate the library's security and facility maintenance services with those of the country, saving more than $2 million.

Director Charles Brown says library staff will meet with county officials in coming weeks, to try to convince them to add back $5 million to the budget.

"I think we've heard citizens really want to preserve as much of library system as could possibly be preserved, and we're working with the community to try and accomplish that," Brown said.

Charlotte Mecklenburg libraries haven't seen such large-scale reductions since the Great Depression. (3/17/2010)
Posted by Retiring Guy at 7:29 AM