Send out the Carrier Pigeons 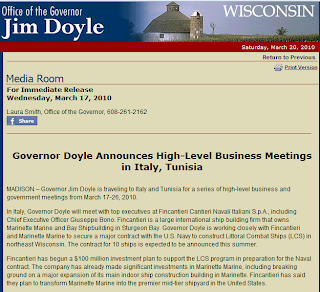 Excerpt: Doyle departed for a 10-day trade mission to Italy and Tunisia on Wednesday but didn't bother telling Lawton he was leaving. She found out about it from a news release she read in Washington, D.C., where she's attending a conference until Monday.

Apparently, the Lieutenant Governor didn't even bother with a news release regarding her current whereabouts. And the sidebar on her home page hasn't been updated recently. 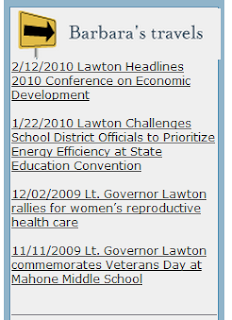 Excerpt: The Wisconsin Constitution says when the governor's out of state, the lieutenant governor serves as acting governor. It's unclear what happens when they are both gone, but the secretary of state is next in the line of succession.

Perhaps it's time to update this section of the Wisconsin Constitution in light of how much things have changed since 1848 and 1979.

Article V, §7 ¶(2)
(2) If the governor is absent from this state, impeached, or from mental or physical disease, becomes incapable of performing the duties of the office, the lieutenant governor shall serve as acting governor for the balance of the unexpired term or until the governor returns, the disability ceases or the impeachment is vacated. But when the governor, with the consent of the legislature, shall be out of this state in time of war at the head of the state's military force, the governor shall continue as commander in chief of the military force. [1977 J.R. 32, 1979 J.R. 3, vote April 1979]

Excerpt: Secretary of State Doug La Follette said he didn't know both Doyle and Lawton were gone until he heard it reported Friday morning on Wisconsin Public Radio. 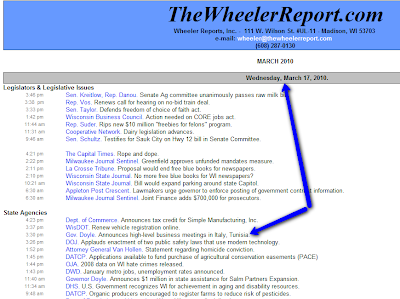 Perhaps his busy schedule does not permit him to check The Wheeler Report on a daily basis.
But to his credit, LaFollette manages to put the issue in perspective.

With cell phones, e-mail and other modern communication methods, La Follette said he doesn't imagine having both Doyle and Lawton out of state will result in him having to make any decisions.