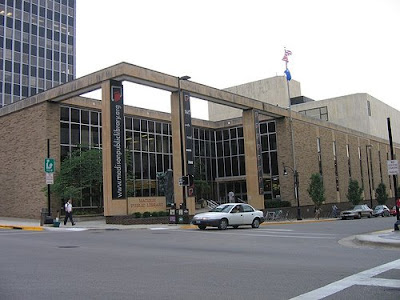 Excerpt: Madison's Central Library was the talk of the town Wednesday, garnering a prominent mention in Mayor Dave Cieslewicz's "State of the City" speech and drawing about 100 people from all over Madison for a public hearing on rebuilding it.

The public forum, hosted by Capitol Neighborhoods Inc., was the first public meeting after the city's Central Library committee heard about the potential for renovating rather than rebuilding the library. Currently, the committee is grappling with two plans to rebuild the library at a cost of $38 million or $43 million, as well as several remodeling schemes that cost between $15 million and $20 million.

Representatives of both rebuilding projects emphasized the added value of their more expensive projects, with both bringing economic development and increased property taxes in the form of office, hotel or retail space.
Posted by Retiring Guy at 6:17 AM