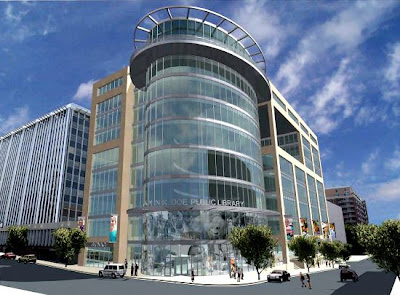 Excerpt: Wall has proposed tearing down the existing 43-year-old library at Mifflin and Fairchild streets and building a nine-story structure on the site. The public library would occupy the second, third and fourth floors, with the rest of the building dedicated to private office or retail space.

T. Wall would purchase the current site from the city for $4 million then sell the library portion back to the city once the building goes up. The city would complete the interior build-out of the library's three floors on its own, at an estimated cost of $38 million.

[Not that I have anything to say about it, but Retiring Guy prefers a design that provides a ground-floor entrance to the library. From the design of the glass atrium, though, it appears that there is a direct visual contact with the upper floors.]