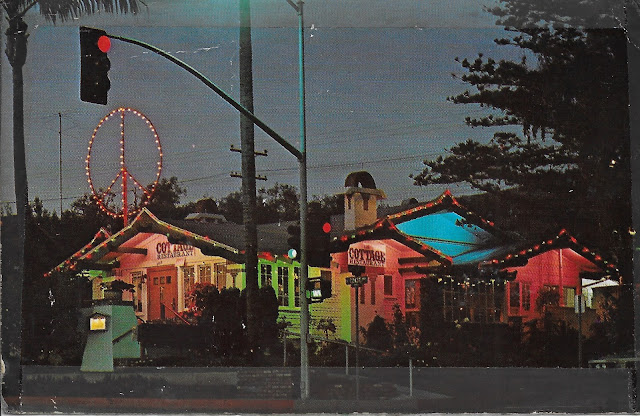 
“I can’t keep people from coming here,” City Manager John Pietig said at a state of the city talk largely devoted to a discussion of the impact of 6.3 million annual visitors on a town of 23,000 residents.

Concerned that the town’s popularity is degrading its livability, realtor Chris Tebbutt asked that the city manager ensure that promoters such as the Chamber of Commerce and visitor’s bureau avoid intensifying the problem. “Without intervention, this sort of runaway train of congestion, crime and polarization has the potential to crush the quality of life in Laguna Beach to be sure,” he said in a follow-up email.


Visitors will no longer be able to dine at the Cottage Restaurant, as it closed in late 2012 after 48 years of business at the above location.  The building is now occupied by Urth Coffee.

I worked at the Cottage twice, from August to November 1971 and June to August 1972.  The menu is best described as California casual. The restaurant is where I was first introduced to avocado and artichokes, spinach lasagna and eggplant Parmesan, mahi-mahi and abalone.  My primary duty was getting all of orders ready to be served.  I was in motion the entire shift, worked my fuckin' ass off.  But it was certainly worth it, living in such an idyllic place, going to the beach every day, relishing the moment.  And I have no regrets that I took a semester off from college to do it.