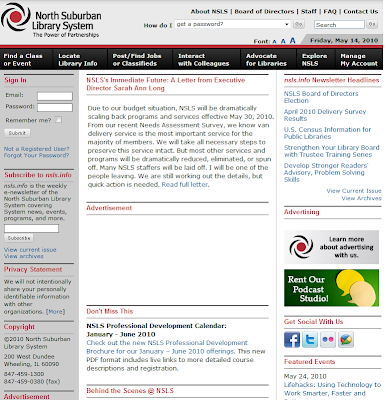 Excerpt: More than half the employees of the North Suburban Library System, a cooperative organization serving about 650 libraries in Cook, Kane, Lake and McHenry counties, will lose their jobs by May 30, spokeswoman Judy Hoffman said.

Exactly how many of the group's 20 full-time and five part-time workers will lose their jobs is not yet known, but "there are definitely going to be massive layoffs at the end of May," Hoffman said.

"Much is still in the works, but that is for sure," she said.

The Wheeling-based library system is one of nine regional library organizations operating in Illinois. They help local facilities share resources and information.

DuPage County has its own system, as does the Chicago Public Library. All of the systems are affected by the state's financial woes, but not all are taking the same drastic steps this month, Hoffman said.

A spokesman for the DuPage Library System could not be reached for comment.