The first two books in the series are not available in LINKcat,  But don't worry, copies are available at other libraries.  (See below) 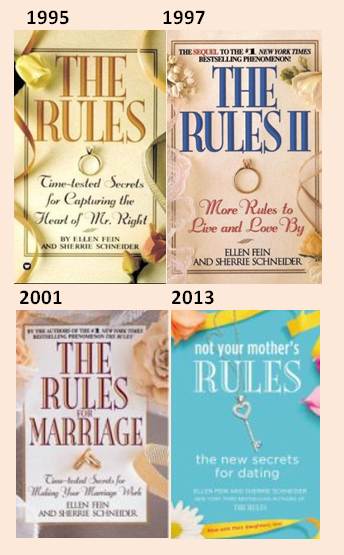 Stuff Your ‘Rules’. “The Rules” taught us how to deform ourselves to nab a husband. But what would we do once we had him?  (The New York Times Sunday Styles, 5/19/2019)


This is how “The Rules: Time-Tested Secrets for Capturing the Heart of Mr. Right” found us. In 1995, on Valentine’s Day no less, presented as an ivory-and-gold colored self-help book for the heteronormative, covered with soft paintings of roses and ribbons (ribbons!) and a diamond ring right smack in the middle, almost like a warning: You were not entering subtle territory. The book’s authors, Ellen Fein and Sherrie Schneider, promised a generation of women who were at war with themselves (not all of us, but enough of us) that we could find the husbands we dreamed of if only we could control ourselves for a few months (a year tops), sublimate our desires and follow 35 simple rules for attracting and securing a man.


According to Merriam-Webster, the first known use of heteronormative occurred in 1991.


It was first published in hard cover in 1995, and the paperback edition was released last February. On Sunday, it will appear as the No. 1 paperback on the New York Times best-seller list for advice, how-to and miscellaneous books.

Propelled by feverish buzz, many thousands of women have not only bought the slender volume of 35 rules (800,000 paperback books have been printed so far), but they have also deluged the authors with letters for advice, tied up call-in radio lines, flocked to the authors' $45-a-person seminars and paid $250 an hour for phone consultations with them (''Can I send my limo to pick up my boyfriend?'' inquired one clueless Hollywood executive, Ms. Schneider recalled. The advice: ''No way.'')

What's more, women have organized Rules Girl support groups that meet everywhere from Sarabeth's Kitchen on the Upper East Side to a condominium in Denver. Members encourage one another to apply the rules to the messy free-for-all that passes for courtship in the 1990's.


Not surprisingly, perhaps, ''The Rules'' sold two million copies in 27 languages. Its sequel, ''The Rules II: More Rules to Live and Love By'' (Warner Books, 1997), was also successful (350,000 copies in print), so it was only a matter of time before ''The Rules for Marriage: Time-Tested Secrets for Making Your Marriage Work'' (Warner Books), due out this week. Though the publisher is moving full speed ahead with a first printing of 75,000, the only teensy wrinkle is that Ms. Fein, the mother of two, has filed for a legal separation from her husband of 16 years and is headed for a divorce. Oops. Guess you can't legislate human behavior, after all. 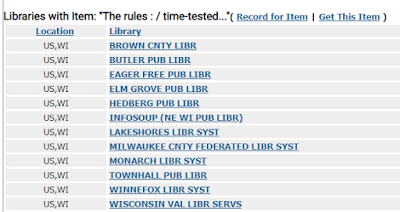