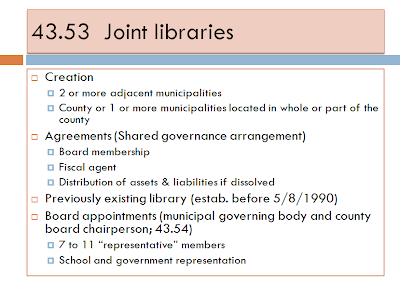 In my view, the least desirable method of public library organization as provided for in the Wisconsin State Statutes.

After 14 months of deliberations, officials from the Village of Sussex and the Town of Lisbon are still unable to reach an agreement on extending a joint library funding contact.

Excerpt:    The counter proposal adopts the first two years of the negotiating committee's pay schedule, but beginning in 2015 the town's share of the cost would drop to about $250,000.

The $250,000 is equivalent to the tax levy that would be raised if town taxpayers paid the 24 cents per $1,000 county wide library tax, according to Town Chairman Matt Gehrke.

Town homeowners do not pay the tax because of the cost-sharing agreement between the two communities.

However, on Sept. 11, the Village Board rejected the counter proposal.