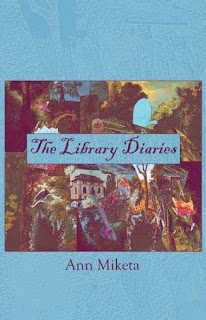 Excerpt:   She wrote the book, intended as fiction, under the pen name, Ann Miketa.

“After working at a public library in a small, rural Midwestern town (which I will refer to as Denialville, Michigan, throughout this book) for 15 years, I have encountered strains and variations of crazy I didn’t know existed in such significant portions of our population,” she wrote in the introduction.

Blurb from the Rockford Public Library, which catalogs the book as nonfiction.

The Library Diaries reads like Seinfeld meets Lou Dobbs meets Glenn Beck. Issues that most of us are afraid to talk about, issues we have had to veil through humor, are talked about candidly by the author, who has seen the terrible consequences of us not talking about these issues—children’s [sic] lives.

An amazon.com review.
First, this book is self-published by PublishAmerica. Self-publishing in itself is a wonderful thing. I'm a huge fan of crowdsourcing and open source publishing models, such as Lulu.com. However, self-publishing definitely becomes a negative when the author, whose spent hundreds if not thousands via PublishAmerica getting their masterpiece into print form, do not engage an editor! Seriously! There are so many typos, inconsistencies, subject-verb disagreements that I wondered if this person even bothered to read what they wrote themselves. One trick one of my undergrad profs taught us in our intro to creative writing class is to read your work out loud. Slowly. As humans, we are all definitely fallible when it comes to writing in regards to grammar and consistency since our brains process much faster than our fingers. There is your protip for the day.
Posted by Retiring Guy at 9:34 PM