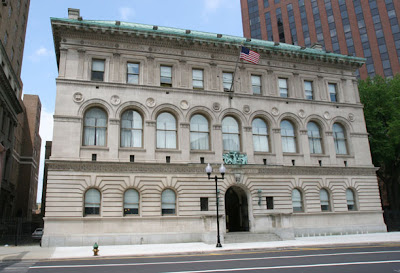 Excerpt: With millions of dollars in budget cuts slated for the Newark Public Library, one of the city’s most revered cultural institutions will face major reductions in staff and services, according to library officials.

Days after the city’s May elections, library leaders were informed they would lose at least $2.45 million in city funding, or nearly 18 percent of the library’s budget. The city typically funds about 90 percent of the library, with the rest coming from grants, donations and state aid. In response to the cuts, the library put together a spending plan that calls for 31 layoffs, salary freezes, branch closures, and two furlough days a week until the end of 2010.

"These were tremendously difficult decisions for the trustees," library director Wilma Grey said in a statement. "We can no longer maintain all of our facilities and services."

The employee furloughs will force all branches to close on Mondays and Tuesdays, starting in mid-August and continuing through December. The First Avenue and Madison branches will be completely shuttered. Only the main branch will remain open on Saturdays.

To Newark historian and library trustee Clement Price, the cuts represent one of the institution’s darkest hours.
Posted by Retiring Guy at 11:50 AM