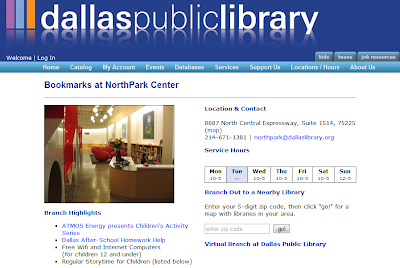 Excerpt: "I think what's happening now is really that focus on convenience," said Sari Feldman, president of the Public Library Association, a division of the American Library Association. "How do we make the public library as convenient as Amazon, Netflix? Part of that is putting library branches in the path of customer."

"We are very aware of the fact that our biggest advantage is that we're free, but if time is actually a commodity for people, will people be willing to spend money rather than go to a library?"

She said putting libraries in malls is one of many efforts by public libraries to become more convenient. Even at more traditional branches, libraries have built cafes, provided downloadable books or installed drive-through windows.

With about 5,000 items, including books and DVDs, the Bookmarks branch in Dallas' NorthPark Center checks out as many items as branches eight times its size, said Jo Giudice, youth services manager. She said in the two years since it opened, it's had to increase story times to 12 a week compared to the two or three at most branches.
Posted by Retiring Guy at 7:26 AM