The Neighborhood Library as Refuge 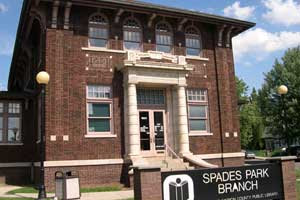 Excerpt:  The Rev. Greg Coates, senior pastor of the First Free Methodist Church, on the Near East Side of Indianapolis, knows first-hand the city's public libraries aren't just important in struggling neighborhoods like his – they're crucial.

When news surfaced earlier this month that the Spades Park Branch Library faced the threat of closure just a few blocks from his church, he knew its effects could prove devastating for those who had come to depend on it.

"I had a teenager come up to me not too long ago, almost with tears in her eyes," he said. "And she just said, 'Pastor, I don't know what I'll do if they close our library. I can't tell you the number of times that my father has come home drunk, and threatened to beat my sister and me, and the only safe place we could go in our neighborhood was the library.'"

Though the decision isn't final (library officials expect to vote in June), the public outcry has been mounting – particularly as the city seems poised to cough up $15 million to maintain Conseco Fieldhouse, home of the Indiana Pacers.

This is Greg Coates (the pastor in the story). Thanks for posting this. I hope our message gets spread!