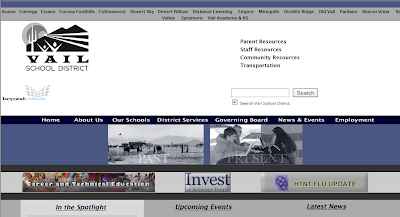 Vail School District
Link to February 12 New York Times article, "Wi-Fi Turns Rowdy Bus Into Rolling Study Hall".
Excerpt: Students endure hundreds of hours on yellow buses each year getting to and from school in this desert exurb of Tucson, and stir-crazy teenagers break the monotony by teasing, texting, flirting, shouting, climbing (over seats) and sometimes punching (seats or seatmates).

But on this chilly morning, as bus No. 92 rolls down a mountain highway just before dawn, high school students are quiet, typing on laptops.

Morning routines have been like this since the fall, when school officials mounted a mobile Internet router to bus No. 92’s sheet-metal frame, enabling students to surf the Web. The students call it the Internet Bus, and what began as a high-tech experiment has had an old-fashioned — and unexpected — result. Wi-Fi access has transformed what was often a boisterous bus ride into a rolling study hall, and behavioral problems have virtually disappeared.
Posted by Retiring Guy at 6:14 AM