The Pay Phone: Still a Life Line in Some Neighborhoods 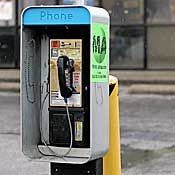 Link to February 13 New York Times article, "Listening In on a Pay Phone in Queens". (Print headline: "Diary of a Queens Pay Phone, Where a Link to Life Costs 25 Cents".)

Excerpt: Everybody knows the public pay phone is dying, but nobody inclined to watch this one would believe it. It sits across the street from Queens Criminal Court, on a patch of sidewalk facing Fast & Fresh Supermarket Deli & Grocery. In the age of the iPhone and the BlackBerry, in a city where cellphones are cheaper and more plentiful than toasters, the pay phone outside Fast & Fresh is outdated, outnumbered, outperformed.

Yet this grimy phone — in a silvery booth that Superman would have skipped over, for it is doorless and not fully enclosed — survives and, in its own nickel-and-dime way, thrives.

In seven days last week, more than 100 people deposited a total of $52 in the phone, at 25 cents per call. Last month, hundreds of people put in a total of $210 worth of coins. Those who stepped into the booth last Thursday and Friday provided a snapshot of New York’s pay phone user, an elusive, rather anonymous demographic sometimes viewed with suspicion.

This type of offbeat, fascinating, and instructive slice-of-life story always renews Retiring Guy's appreciation for newspapers. (Mr. Patir's vignette is likely to make your eyes water.)
Posted by Retiring Guy at 7:11 AM