Boys' club: 5 of 21 seats contested on the Oneida County Board of Supervisors 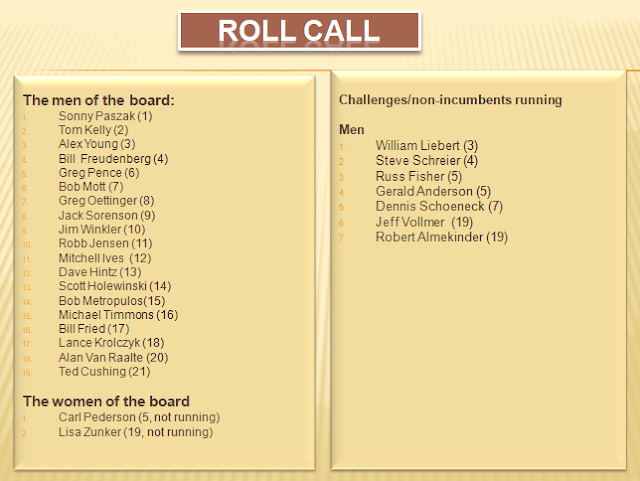 Source:  Oneida County Board of Supersivors


There will be five contested races for the Oneida County Board of Supervisors this spring.

In District 19, which consists of Wards 5 and 6 in the town of Minocqua and Ward 1 in the town of Lynne, incumbent Lisa Zunker has filed a notice of non-candidacy.

Jeff Vollmer of Minocqua, who ran against Zunker in 2016, has filed again. His opponent will be Robert Almekinder, also of Minocqua.

District 5, which incliudes Wards 9, 12 and 14 in the city of Rhinelander and Ward 2 in the town of Pelican, will also have a new supervisor as incumbent Carol Pederson has decided not to run for re-election.

Russ Fisher of the town of Pelican and Rhinelander's Gerald Anderson, who was defeated by Pederson in 2016, will square off in April.

In District 7, incumbent Bob Mott, who represents the towns of Enterprise, Schoepke, Monico, Piehl, part of Three Lakes and part of Stella, will be opposed by Dennis Schoeneck of the town of Enterprise.