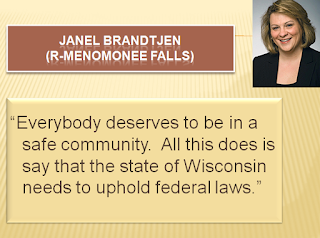 She said it doesn’t promote safety, because it makes immigrants afraid to contact police to report crimes, and it also infringes on a local government’s constitutional right under the 10th Amendment not to enforce federal law.

Clearly, you have gubernatorial aspirations.


Vos did not immediately respond to the criticism Thursday. Earlier in the week, top Republicans, including Vos and two GOP senators, Duey Stroebel and Chris Kapenga [2 of the top nutburgers in the State Senate], clashed on whether lawmakers should consider increasing gas taxes or vehicle registration fees in the next legislative session.